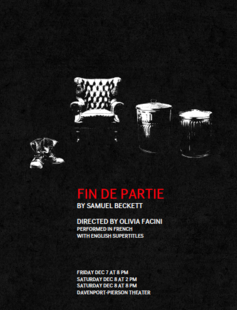 Beckett’s “Endgame” as you’ve never seen it before: in French.

One in a chair. Two in trash cans. One on his feet. All held here by their seemingly inescapable relationship to each other. In the banality of their speech, a man and his servant reveal glimmers of their past and the uncertain future. Repetition and stasis seem to prevail, yet memory, frustration, and longing ripple beneath the surface, threatening disruption.

Performances will be in French, following Beckett’s original French text with new revisions by the playwright, translated into French by the director. There will be English supertitles.

The show runs an hour and a half.

“Fin de partie” is presented through the generous support of Molière and Co. Fund in memory of June Beckelman Guicharnaud from the Department of French and through special arrangement with Les Éditions de Minuit.