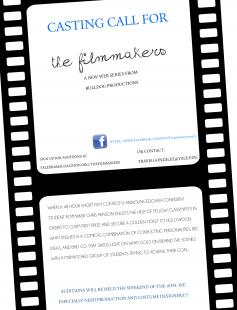 ***Please Select two roles to audition for. You will be asked to read lines from a scene of your choosing involving the character. Please email travis.gonzalez@yale.edu for a copy of the script***

When a 48 hour short film contest is announced,over-confident student filmmaker Chris Henson enlists the help of fellow classmates in order to claim first prize and secure a golden ticket to Hollywood. What ensues is a comical combination of conflicting personalities, big ideas, and bad CGI that sheds light on what goes on behind the scenes with a mismatched group of students trying to acheive their goal.

Chris Henson:The over-confident director of the project. While he knows something about making movies, he lets his ambition and an exaggerated view of his abilities speak louder than his actions. Prone to comparing himself to famous Hollywood directors (and bossing others around like one), he believes this contest is his ticket to fame and fortune and that no one is more deserving than he is to win.

James Cromwell:
Chris’s friend and classmate, and the Director of Photography on the project. He has a large knowledge of filmmaking and editing, but he often keeps this to himself, acting as the soft-spoken voice of reason to Chris’s ego.

Ingrid Leigh:
The writer for the short film, she is hipster, intense, and proud of it. Not one to back down, she is highly defensive of her writing and is resistant to any changes that aren’t her own idea, considering her work to untouchable.

Joanne Jacobs/Martian Princess:
The producer and leading lady of the short film, as well as Chris’s girlfriend. Like Chris, she believes this contest to be the ticket to Hollywood to become a famous actress. She isn’t the sharpest tool in the shed, and her ignorance tends to irritate the more cerebral Ingrid.

Mike Johnson:
The production assistant who just wants to be an actor, but unfortunately is looked down on by Chris. His main job is getting coffee.

Joe (limited speaking and screen time):
The cameraman that works for James. Being comfortable with holding a camera is preferred

Avery/Alien:
A science fiction nerd who is super enthusiastic about aliens. He auditions for that role in the short film and gets the part, although his hyperactive nature and weird behavior makes for an awkward dynamic between him and the rest of the crew.

Gabriel:
Writer who auditions for an acting role

Kara:
An incessant cryer auditioning for an acting role

Judge #1:
Part of panel that reviews the short film

Extras:
Tourists
Other Judges on the Panel