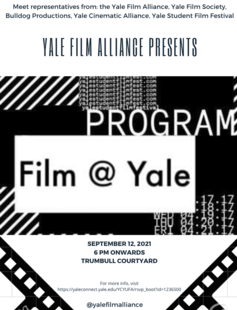 Join the Yale Film Alliance on Sunday, September 12 at 6:00 PM in the Trumbull Courtyard for the Film @ Yale Info Session! Representatives from all of the film groups on campus will be present including: Yale Film Alliance (YFA), Yale Student Film Festival (YSFF), Bulldog Productions, Yale Cinematic Productions (YCP), and the Yale Film Society (YFS). Stop by to talk about film on campus and to meet other Yale students interested in film and filmmaking!