Die Fledermaus “The Bat” (In English) 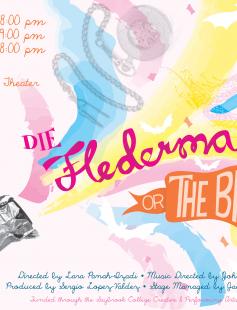 The Waltz King’s magnum opus, a glittering comic opera - performed in English with full orchestra!The show is a rare combination of a great musical work and a comedic romp with glib and hilarious dialogue. The music contains some of the very best soaring Viennese melodies (including some of Strauss’ signature waltzes and polkas), and all sorts of great occasions for vocal showmanship. Its story, comedy of Viennese aristocrats being had by each other and their servants, takes place in the space of a night and a day.Major roles include: Rosalinde and Adele (soprano), Eisenstein and Alfredo (tenor), Falke (baritone), and comic tenor/baritone roles Dr. Blind and Frank (a jailer), Prince Orlofsky (mezzo soprano or countertenor) Monday and Wednesday auditions will be held in BRL 204. Tuesday auditions will be held in the 220 York Chapter Room, on the third floor.

Off Broadway Theater
For all inquiries, please contact:
john.masko@yale.edu