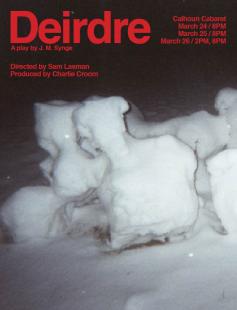 In a small house in the midst of a forest lives the most beautiful woman in the world. A prophecy has foretold that she will be the downfall of any man who loves her. Seeking both to avert disaster and to keep her for himself, the king keeps her imprisoned in the wilderness - until a young man arrives and sets fate in motion. Deirdre of the Sorrows is the last play of John Millington Synge, better known for his controversial Playboy of the Western World. It was unfinished at his death in 1909, and completed by his friend W. B. Yeats and his fiancee, Molly Allgood. The material is taken from an ancient Irish myth, Longes mac nUislenn, Exile of the Sons of Uisna.