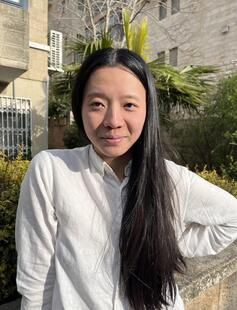 On Day 4, the Yale Student Film Festival presents screenings of the Short Shorts Block and the Narrative Block.

In between these two blocks, we will be presenting a talk by Liz Rao who will speak about different aspects of storytelling and the film industry, and the comprehensive experience of being an independent producer-editor who started off working in a festival.

Liz Rao is a filmmaker based in Brooklyn, NY. Growing up between Missouri, Nashville, and Chicago, with long summers in southern China and Beijing, she is drawn to projects that elevate new characters and fresh stories. She loves films that question existing structures — through surprising style, intimate storytelling, and bold imagery.

She has taught workshops in experimental filmmaking at True/False Film Festival, has given artist talks at The Edit Center, and UnionDocs, and is a member of the collective Brown Girls Doc Mafia. Before filmmaking, she worked for four seasons on the programming team at Tribeca Film Festival.

The screening of the Short Shorts Film Block will take place on Saturday, April 23, at 11am in LORIA 250.

The screening of the Narrative Film Block will take place on Saturday, April 23, at 2:30 in LORIA 250.

This event is sponsored by the Dean’s Discretionary Fund for the Arts and with the help of the Film and Media Department.

Free tickets for vaccinated Yale ID holders are available at the following link: