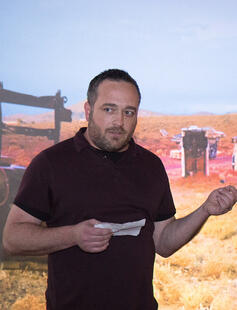 On Day 2, the Yale Student Film Festival presents the screening of the Experimental Film Block followed by a screening and talk by Derek Taylor, New Haven filmmaker, producer and professor at Southern Connecticut, on his documentary and experimental work. This year’s theme, Local Voices, searches to uplift voices from the local communities surrounding us.

Derek Taylor’s moving image work is an amalgamation of documentary and experimental forms, consisting of films about landscape, history, travel, time, space and the nuances of perception. The overriding theme of “space” manifests itself in several contexts in his work: physical, geographical and transformative. He maintains a very defined interest in the hybridization of both of these forms (experimental and documentary) and a clear focus on the investigation of both the ephemeral and the permanent in the human experience. His work has been screened at a number of festivals both nationally and internationally. He studied film, video and new media at the School of the Art Institute of Chicago and currently lives and works in Connecticut.

The screening of the Experimental Film Block will take place on Thursday, April 21, at 5pm in LORIA 250, followed by Derek Taylor’s screening and talk at 6:30pm in LORIA 250.

This event is sponsored by the Dean’s Discretionary Fund for the Arts and with the help of the Film and Media Department.

Front of House staff will be checking tickets, Yale IDs, and proof of vaccination.