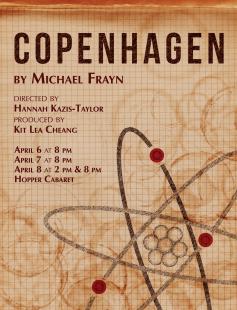 Heisenberg – No one understands my trip to Copenhagen. Time and time again I’ve explained it. To Bohr himself, and Margrethe. To interrogators and intelligence officers, to journalists and historians. The more I’ve explained, the deeper the uncertainty has become. Well, I shall be happy to make one more attempt.”

The ghosts of Niels Bohr and Werner Heisenberg, leading physicists whose discoveries laid the groundwork for nuclear weapons, discuss Heisenberg’s trip from Nazi Germany to occupied Denmark to visit his close friend and former mentor, Bohr. The ghosts argue about their clandestine meeting in 1941 Copenhagen, teasing apart where Heisenberg’s true loyalties lay as he led Nazi efforts to build the atomic bomb. The three characters come to terms with the realization that their science is no longer just an engaging puzzle, but rather a politically and personally fraught occupation, as they reflect on themselves as particles within the molecule of Copenhagen.