by Natalie Brown; adapted from the play "for colored girls who have considered suicide / when the rainbow is enuf" by Ntozake Shange 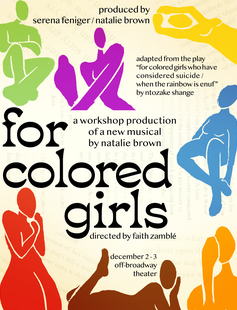 In 1976, the revolutionary choreopoem for colored girls who have considered suicide / when the rainbow is enuf opened on Broadway. A landmark piece in American theater and in the Black feminist movement, the piece explores themes including racism, sexism, love, violence, and identity through an ensemble of seven Black women, each of whom represent a color of the rainbow.

This new musical adaptation sets the original text of the play entirely to music, culminating in a two act opera. With this reimagining, we aim to uplift and highlight the original piece in a new way, culminating in what is ultimately a celebration of the complexities of the Black female experience.

The show will be produced in three stages: a closed workshop reading in October, a concert reading in December (stay tuned for a ticket link), and a full production planned for April 2023. If you are interested in getting involved at any stage of the development process, please contact serena.feniger@yale.edu and natalie.brown@yale.edu. We especially encourage women of color to reach out!

A note on casting: This series of readings has been precast, but we will be holding auditions for the April production in the NOVEMBER CASTING CYCLE. Stay tuned for more information!

Venue Accessibility:
Building is accessible via a ramp at the main entrance. Seating and facilities are available on the main floor.