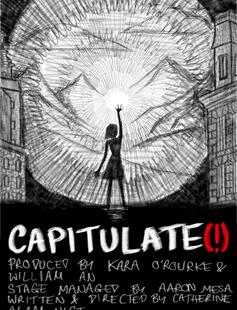 What do we do if what we love conflicts with what we believe in — or worse, who we are?

CAPITULATE(!) is an original queer romantic tragedy set in a futuristic dystopia that is strangely reminiscent of a lot of shittiness of the past. On paper, Yuri’s life looks ideal: adopted by a wealthy and powerful couple after the death of their parents, attending a prestigious - if draining - academy called the Institute of Highest Learning, and dating the daughter of a (in)famous politician. Only, they continue to have the unsettling feeling that there is a disconnect between something inside of them and how they live their life — or rather, how they feel they must live their life. And this is not in the least because they are the only person they know who openly pushes back against binary gender. CAPITULATE(!) follows them as they try to find some sort of self-actualisation in a world that would have them confined to dichotomies, archetypes, and norms, and the chaos that ensues for those around them when one person tries to fight the mindset of thousands.

This production aims to go beyond the confines of ‘representation’ on our stages at Yale - i.e., people of colour/trans people allowed to be present onstage, but responsible for neither the writing of the stories they are embodying, not the creative direction of the project. We strongly encourage other POC and/or trans/queer artists to reach out to our director (catherine.alam-nist@yale.edu) or producers (william.an@yale.edu and kara.orourke@yale.edu) about any production role you may be interested in or to audition for the show.

Our audition workshop is Monday August 29 at 3pm in Watson A46.

Our group auditions are Wednesday August 31 7-8pm and Friday September 2 from 4 to 5. Feel free to just show up to whatever time works for you.

Also, if you can’t make either of the times, just email us and we’ll find another time to see you!