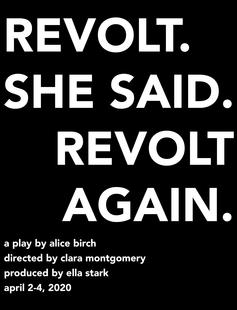 A metatheatrical exploration of the very idea of feminist action and its impact on those closest to it, Revolt. She Said. Revolt Again. sets out the paradox of a community beholden to a prescribed brand of apparent rebellion. As the characters of its first few vignettes obey a succession of orders for supposedly rebellious action, the play itself starts to buckle under the weight of such exacting demands until it itself falls apart.

Or, maybe, it comes together for the first time.

Revolt. She Said. Revolt Again. is seeking designers and performers of all experience levels, genders, and racial/ethnic backgrounds. Auditions will be held the week of December 1-7 in Room 002 in 220 York St.

**Please be aware that this play contains explicit language and will have stylized depictions of sexual and violent situations.**