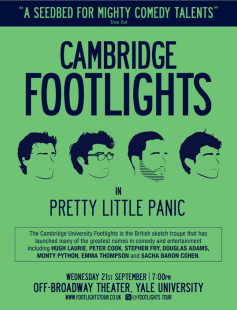 The Cambridge University Footlights are a seedbed for mighty comedy talents (Time Out), having launched such stars as Hugh Laurie, Monty Python, Peter Cook, Stephen Fry, Douglas Adams, Emma Thompson and Sacha Baron Cohen (Borat).Widely regarded as “the most renowned sketch troupe of them all” (The Independent), their 2011 Tour - Pretty Little Panic - has already played a string of prestigious London venues and a sell-out month at the Edinburgh Fringe Comedy Festival. Now it transfers to the US, stopping off at Second City (Chicago), iO West (Los Angeles) and UCB (New York) amongst other major venues. Don’t miss out on this “must-have ticket” (The Times of London).

Off Broadway Theater
For all inquiries, please contact:
charlie.croom@yale.edu