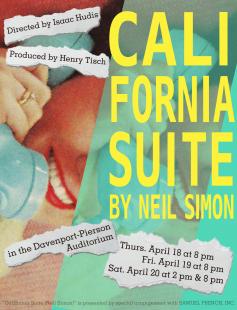 Neil Simon’s California Suite consists of four playlets, all of which take place in Suite 203-204 at the Beverly Hills Hotel. “Visitor from New York” is about a divorced couple deciding if their daughter will live with her father in Los Angeles or her mother in New York. In “Visitor from Philadelphia,” a man tries to hide his unconscious prostitute from his wife, with hilarious results. “Visitors from London” depicts a British Oscar-nominated actress and her gay husband before and after the awards ceremony. Lastly, “Visitors from Chicago” focuses on two couples who are best friends. Once one of the wives is injured on the tennis court, things quickly devolve into madness.