Blood Will Have Blood

A New Opera Inspired by Macbeth 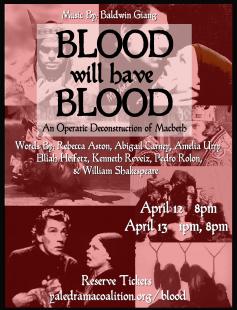 Blood will have Blood is a deconstructive adaptation of Macbeth. Instead of projecting Shakespeare’s lines onto another time and place as many productions have done already, this work innovatively examines the inner logic of Shakespeare’s Macbeth. This work tests the moral logic of the world Macbeth created, taking it to its logical conclusion. The result is a dark and raw examination of the psychological tension between and within each of the main characters, but presented without the narrative order that Shakespeare uses. The opera forgoes the setting and time period that contextualized Shakespeare’s work, which would only unnecessarily burden our treatment. Scenes from the play are presented in a different, new temporality to extend the logic of “fair is foul, foul is fair” to time and the narrative process itself. Six talented Yale College poets (Aston, Carney, Heifetz, Reviez, Rolon, Urry) wrote 6 dramatic monologues inspired by an individual character from Macbeth and Shakespeare’s language, forming the core of the libretto. The opera unfolds through recitatives, which uses Shakespeare’s original language accompanied and distorted by interactive electronics, and arias, which uses the original monologues accompanied by a chamber ensemble. The use of both Shakespearean and “adaptive” text questions the fair-foul binary in the concept of adaptation itself. Just as Shakespeare’s Macbeth questions the legitimacy of political power, we ask what is “the legitimate” in a work of adaptation? Overall, Blood will have Blood is a thrilling, innovative, and at all times intensely emotionally gripping work that probes deeply into Shakespeare’s conception of human nature. Presented in a semi-staged production with lighting, the duration is approximately 35 minutes.The instrumental ensemble is comprised of two violin, viola, cello, flute, clarinet, harp, and percussion. Please email baldwin.giang@yale.edu if you are interested in playing with us.