You on the Moors Now 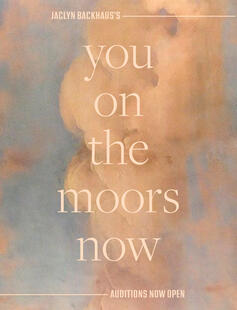 Jaclyn Backhaus’ You On the Moors Now joins together the heroines of four iconic literary romances: Pride and Prejudice’s Elizabeth Bennet, the titular character of Charlotte Brontë’s Jane Eyre, Jo March from Little Women, and Cathy from Wuthering Heights. After rejecting marriage proposals from their respective suitors, they turn tradition on its head and speak freely, frankly, and farcically about love, relationships, social pressures, and, of course, the patriarchy. In a theatrical commentary on the repression of male emotion, the four men (Mr. Darcy, Rochester, Laurie, and Heathcliff) dramatically grieve their failed proposals as Jane, Jo, Lizzie and Cathy get jobs, further themselves as individuals, and form a closely bonded sisterhood. Belligerent and offended by their independence, the men decide to go after the women who rejected them, which leads to the novels’ side characters choosing (and occasionally switching) sides in a battle of deception that eventually explodes in hilarity and all-out war. Like a leading ladies of 19th century literature support group, this play creates an alternate universe in which these characters are given the language and the space to say everything they always wanted to, while offering a thought-provoking alternative to the archetypal marriage plot.

We will be casting in the November Casting Cycle!

YOU ON THE MOORS NOW AUDITION PACKET