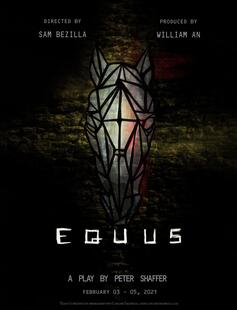 At least I galloped – when did you?

A boy, Alan Strang, has been entrusted to the care of psychiatrist Martin Dysart. The circumstances of his admission remain murky save one grave fact: the boy blinded six horses with a metal spike. As Dr. Dysart delves into Alan’s mind and slowly uncovers the disturbing truths of that fateful night, the foundations of his own reality begin to crumble. Equus is a suspenseful exploration of sexuality, religion, psychology, commercialism, and what we worship in the modern world.

We’ll be casting in the October Casting cycle and especially encourage BIPOC, LGBTQ+, and first-time theatermakers to audition or join our production team. The roles of Alan and Dysart have already been cast, but all others are open. We expect the weekly rehearsal time commitment to be approximately 4-6 hours per week up until the week before the performances. We also welcome and encourage involvement with nearly every tech department, including costumes, lights, sound, and more!

Auditions will be held September 27th-29th with callbacks on October 1st (7-9 pm). Auditions and callbacks will be held in the Humanities Quadrangle courtyard. Please see the Audition Packet below for more information.

Please feel free to also email our Director, Sam, at sam.bezilla@yale.edu with questions or advice on how to audition, or William, our Producer, at william.an@yale.edu to get involved on the tech side.